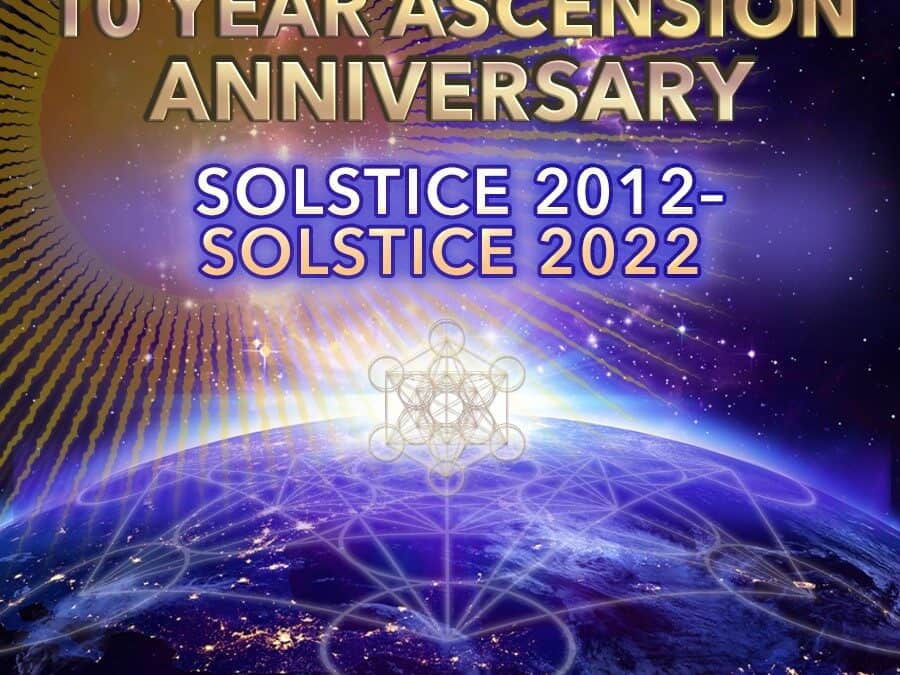 In just hours we celebrate the shortest day of the year, the annual Solstice activations on Wednesday, December 21, 2022 at 21:47 UTC (1:47pm PT). It is the sacred day we welcome the return of Light in the northern hemisphere. Much has been unlocked since the 12:12 portal was activated. On this day we mark the ending of an old era and the beginning of a new cycle, a new season and a new era!

This Solstice is a special day to celebrate the 10th Anniversary of the seed moment of the cosmic Ascension that occurred on 12:21:2012! It has been 10 years of intense crystallization and transmutation of our earthly energetics. We stepped into the Refiner’s Fire of Purification, healing trauma and stripping away the false layers of human ego. We bathed in the galactic light frequencies, awakening to Spirit and connecting to our Divinity. On this Solstice day, we honor the past transformative 10 years and initiate the next 10 years of Soul embodiment.

It only happens once a year, when the Solstice Gateway reveals a direct path to the Great Central Sun, located at 26-27 degrees Sagittarius.…it opens a cosmic portal in zero point energy at the galactic center. As the layers peel away, we step into new energy, new openings and possibly new timelines. Whatever we initiate during the 12:12 – 12:21 Gateway will ripple into the quantum field of all possibilities. We are in peak power potential with the galactic center! We are in the zero point stillness of universal balance in the Circle of Life.

The Solstice occurs on 12:21 – 12 and 21 are mirror opposites, uniting all into balanced Oneness! Envision your earlier self in 2012 and how far you have evolved and awakened. The Solstice ‘mirror’ allows all to be seen, acknowledged, healed and integrated, as we initiate the next 10 years of Ascension.

Many of you are lifting your consciousness, becoming New Earth Wayshowers with higher levels of awareness and stabilizers of the crystalline grids. Take this moment of powerful source force and merge with your Soul’s destiny. These are potent manifesting days, let your imagination run free in the quantum field of infinite possibilities. You are birthing your Soul’s destiny in a new era. Connect to the stars, imagine living life as a Divine Human!

Just hours before this momentous Solstice, Jupiter is sliding into Aries on December 20 until May 17, 2023. Jupiter is at zero degree Aries during this momentous zero point ‘12D’ galactic gateway. Jupiter the magnifier in fiery action-oriented Aries will provide much needed inner drive and confidence to go BIG and BOLD in 2023.

As we join together from all around the world, we will seed the planetary field with new earth templates, consciousness and visions as we alter the course of humanity. We will flood the field with LOVE vibration! Super-charge your Intentions for 2023! If you would like to participate, register here: https://newearthcentral.com/?p=254619