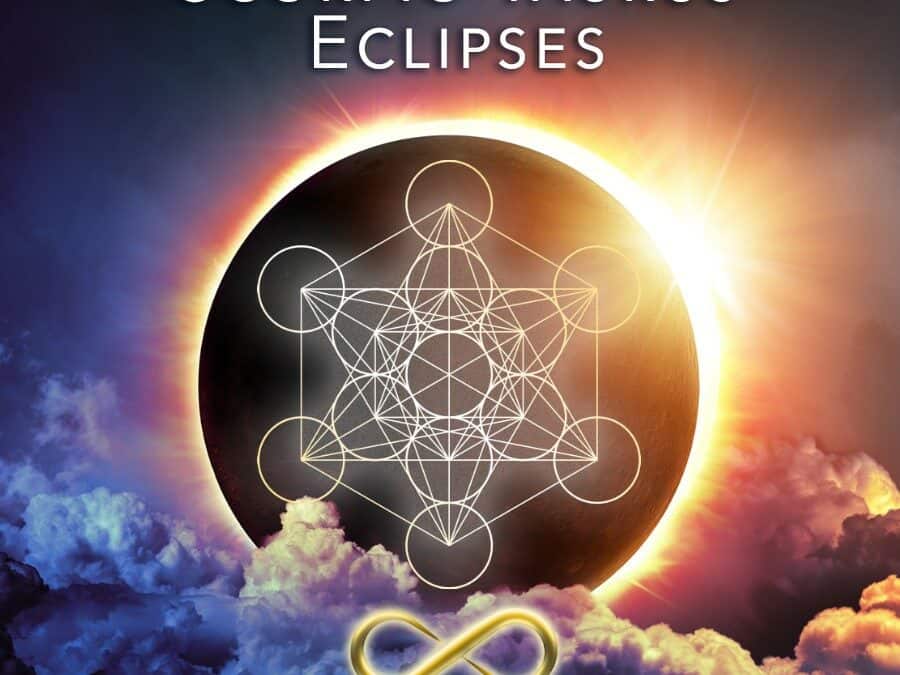 In just hours the Scorpio Solar Eclipse arrives at 1:58 am PDT (8:58 UTC) this Tuesday, October 25th. The 2nd Eclipse occurs on November 7-8. Eclipses typically happen in pairs, on the full and new moon. The upcoming eclipses occur on the Taurus (North) and Scorpio (South) nodal axis until July 17, 2023. In astrology the lunar nodes reveal your karmic path in this lifetime. The South Node reveals your karma, your past lives and the gifts you’ve brought in. The North Node reveals your dharma and destiny, the new direction unfolding in this lifetime.
While the eclipses fall on the Taurus-Scorpio nodes, we can anticipate more spiritual awakening as the density veils shift and lift. The internal dynamic between Taurus and Scorpio seeks balance between the physical and metaphysical realms. As we rise from the ashes (Scorpio) will we integrate and embody (Taurus) our divinity.
The Taurus-Scorpio eclipses initiate deeper soul-searching in our quest in becoming divine humans.
The Sun represents power. A solar eclipse brings up issues around power, how we use, misuse, and apply power in our lives. A solar eclipse in watery Scorpio deep dives into the undercurrents of unconscious self, hidden self, the unawakened self. Scorpio reveals and catalyzes transforming the shadow side into pure essence, into Light!
Just as the Scorpio-Taurus eclipses shake the hierarchal power structures in society, the Uranus-Saturn square shifts the balance of power in the collective. This eclipse series weaves through the entire system, impacting both macro and micro levels of consciousness. We were born into an imbalanced global power system, ruled and controlled by the top-tier. Within ourselves, we also function within a hierarchical system, ruled by the ego self.
As the eclipses dissolve the rigid structures of control, we must pull down the hierarchy of ego within our own energy field. The Scorpio Solar Eclipse initiates a new opportunity, an alternative option, a new dynamic with personal power. As we let go of the hierarchy ruling our every thought, feeling and action, we rise higher, ascending into the new operating system. We have the extraordinary choice to shift into the heart-centered toroidal circular continuum.
In quantum physics when particles act like waves in an organized manner, they reach ‘coherence’. The more the wave-like nature of particles are aligned, the more coherence occurs. When we unite together and achieve focused intentions, we create wave coherence. Our group mind creates a ‘ripple-effect’ in the field, like skipping a small pebble across the pond, causing an ever-expanding ripple outwards (outflow).
The Awakened have come to planet earth with a united mission, encoded in their soul blueprint as system-busters and cycle-breakers. With revolutionary Uranus influencing the solar and lunar eclipses, we are witnessing a global tsunami of cycle-breaking. When you pull your power from the hierarchy, it becomes weaker. As more and more awakened beings pull out of the imbalanced system, it gradually falls apart. In its place the new collaborative community rises. Out of the ashes, the Scorpio phoenix emerges in all its glory.
Join other Light Beings and System Busters in the Eclipse Gateway, as we birth alive the New Earth. This Tuesday’s Solar Eclipse is an extraordinary time to start new projects and begin a new chapter in your life. During a solar eclipse all possibilities are on the table. Dream big!
Register at: https://newearthcentral.com/?p=254607
Lovingly, Meg